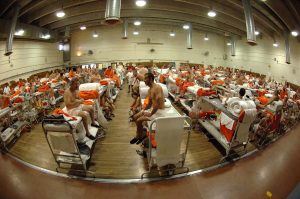 In 2011 the federal government ordered California to reduce their prison overcrowding. The motivation was to improve the types of medical and mental health treatments for inmates. In order to meet this court ordered mandate California Gov. Jerry Brown instituted a program called realignment. Under this program lower-level offenders were sentenced to county jails instead of state prisons.

Violence Increase
In California there are 10 counties that account for over 69 percent of California’s inmate population. Since realignment has been instituted each of them have experienced an increase in the level of inmate fights and attacks on jail employees according to records obtained by the Associated Press.

Low-level Criminal to Local Jails
Under realignment only inmates convicted of violent, sexual as well as serious crimes serve their time in state prisons. The rest of the inmate population is considered low-level criminals and now serve long sentences in local jails. These local jails were designed to house prisoners for twelve months or less. Individuals who violate the terms of their paroles in California now serve their time in county jails.

Lawsuits
Now many of the California counties impacted by the realignment program are being sued. The ironic twist is that many of the very law firms who compelled the state to decrease prison populations are the ones now bringing lawsuits against the counties.

Training
The California Board of State and Community Corrections are assisting the affected counties with the transition to realignment. They are planning to create new types of training for local jail staff as a way to help them deal with the inmate influx.

Mixed Results
Since the implementation of realignment the California prison population has decreased. Unfortunately, it hasn’t been reduced to meet the required court-ordered deadline. Govern Jerry Brown has asked the federal court to extend the deadline.

Continuing Issues
The California prison system needs to be able to accommodate approximately 10,000 prisoners to meet the federal court demands. They have contracted for prison beds in private prisons in other states to meet prison housing needs.

Rehabilitation
The California Board of State and Community Corrections are trying to institute more programs that depend on rehabilitation to decrease the prison population. The inmates who are in and out of prison regularly will be the focus of this program.

Female Inmates
Realignment has led to a drastic decline in the number of females in the county jails. The reason is that most women are convicted of non-violent offenses that don’t involve sexual violations. Many of the county jails are now creating programs designed to assist women with staying out of jail.

Evaluation
Currently California does not have access to a sufficient amount of meaningful data about realignment. This means that all the effects of realignment are not able to be completely evaluated. What data has been received shows that many local jails do not have sufficient capacity to handle the increase of inmates created by realignment.