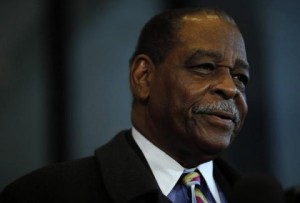 Cook County Commissioner William Beavers, 78, grew up in Chicago. He went to the city’s public schools and went to a college downtown. He guarded the streets of the Windy City for two decades as a police officer before becoming the 7th ward Alderman. His biography is a clear record of his dedication to the city, despite the tax conviction against him. The crime has been decreed unrelated to his political position. So why is Commissioner Beavers being denied bail?

The defense attorneys on Beavers’ case told U.S. District Judge James Zagel that their civil servant client was unlikely to flee given his ties to the community. They also claimed that the argument they will be using in the appeal is solid, giving Beavers no reason to skip bail. The issue they are referring to is the exclusion of their tax expert during the original trial. They believe it was wrong of the judge to deny the tax expert the chance to testify and will be asking for the decision to be reviewed. Judge Zagel is skeptical. When reading the reasons for denying Commissioner Beavers’ bail he stated that a review of a Judge’s decision is only done if certain standards are met and in this case they are not. The Judge is not suspected of abusing discretion, merely of not giving Beavers’ and his team of lawyers what they want.

Beavers holds renown as a political genius. He is known for making deals and being candid about what he wants and feels. It is common knowledge that Beavers got the Commissioner through a deal that put Todd Stroger on the ballot for County Board President and Beavers’ daughter into the 7th Ward Alderman seat that Beavers himself would be vacating. Commissioner Beavers considers himself a hero to the people of Chicago and a victim of false allegations. He admits that gambling is his past time and that he borrowed money from the campaign funds allotted him but denies that any crime actually took place. Beavers believes that he is having these charges brought against him as punishment for refusing to wear a wire to incriminate Commissioner John Daley.

The government tells a different story. The courts convicted him of four counts of tax evasion. Beavers was sentenced to a minimum of six months in a federal prison. He will also have to pay a 10,000 dollar fine and 39,000 dollars in back taxes. The Judge wants 400 hours of community service. It was also decreed that Beavers hold off on gambling as a condition for his one year of probation. The now ex commissioner still thinks he will get off on all counts and goes so far as to brag of his victory in the media. He surrendered to the jailhouse on December 2nd so either way he will be spending the rest of the appeal in suspense.